An important social phenomenon in our cities and rural areas is the proliferation of multi-scale regional conflicts, from protests by the locals for access to better services or equipment to organized citizens’ movements that challenge the system of democratic representation in many countries. Public representatives contemplate with growing concern as their decisions, especially with regard to territorial, environmental and urban management are increasingly challenged by the citizens, to the point of trigger often more than an act of violence. The clearest example can be seen in the process of approval of urban master plans. If this process 20 years ago arose a poor attention and a only a few hundreds of submissions were submitted, we are now accustomed to even the smaller towns produce all kinds of protests in the plenary sessions of the municipalities and several thousand of allegations against the approval of the plan.

Increasingly, public decisions are answered by wider layers of society that do not use the traditional means of political representation such as political parties to express their opinions, but are organized in groups and associations or urban social movements. This shows that society is no longer willing to remain a passive spectator in the process of urban and land commodification, segregation and degration according to market-oriented logics. Nevertheless the proliferation of conflicts still has not received strong interest from the academic world. So far there has been little bibliographical data that focus primarily on the description of the phenomenon rather than understanding or the proposed new mechanisms of participation, consultation and ultimately, ideas for institutional innovation in systems representation and local management is the root cause of many of the protests.

Traditionally the study of urban and regional conflicts has been included in research on social movements, the third sector, the role of civil society, collective action and urban movements from sociology, anthropology and political science. Classic contributions in these disciplines as Castells’ The Urban Question, The Right to the City of Henri Lefebvre, the sociology of Giddens and the Critique of Modernity in Touraine, just to name a few, have been studied indirectly urban conflicts land as an expression of growing public discontent with their representatives who ruled the cities and approved projects with a technocratic and bureaucratic approach. For these authors, conflicts in the 60 urban and 70 would be a sign of the crisis of Keynesian welfare state and even a good a example of the contradictions of the capitalist system. One of the cornerstones in this research is the study of the changed and changing social conditions in the new era described as the information society by Castells in relation to the evolution of collective action, especially urban social movements that reclaim alternative communitarian management strategies. According to Touraine, the new social movements of the new postindustrial stage since the protests of the 60 juveniles are called to occupy the place that had the labor movement in industrial societies. This research has stressed on the study of the evolution of collective action, structure and discourse of these movements rather than the consequences of his action which are the spatial conflicts, and how as a result of these conflicts the city and its management have evolved.

Map of class-struggle in Barcelona. Colors show an autocorrelation analysis based on average family income: blue sections are clusters of poor areas and red ones are clusters of rich suburbs. All the conflicts emerged due to housing eviction and destruction issues linked to development or redevelopment plans, as well as those conflicts emerged due to health issues (construction of toxic or noisy facilities), are located in poor areas. Clusters of rich sections in Barcelona enjoy a city without serious conflicts, except for a couple of conflicts in Collserola natural park because of environmental degradation issues.

In all these discourses the importance of the vector of the territory is not very often reflected, as geographers and other specialists in the territory does not begin to pay attention to it until the 70’s. From this period dates the first papers of Janelle and Millward on the location of conflicts in the uses of the city and the management model of it in Canadian cities. A few years later, Cox continues the study of locational conflicts and tries to characterize the strategies employed by opposing players in order to impose their interests, from passive participation in the planning process to violent confrontation. At this time the geography begins to broaden its interest on the analysis of spatial and urban conflicts, but always with a vision corseted to conflicts over land use, as the introduction of unwanted equipment or infrastructure in residential neighborhoods. In this sense, one of the most important contributions to the description and characterization of the phenomenon of territorial conflicts Brion performed by the late 80’s by coining the acronym “NIMBY” or “not in my back yard” to explain the positioning often reactive of citizenship as a cause of many conflicts. Since this time, more territorial conflict studies related to technological risks, environmental destruction, landscape, natural resources, heritage etc are carried out.

In Spain, the interest in studying the basic territorial disputes settled permanently in the 90’s when we saw the proliferation of conflicts of this type, although previously there had been particularly interesting contributions on conflicts linked to water use and of course there was a long tradition of studying all kinds of urban and territorial disputes in Latin American literature. In our country Oriol Nel·lo it is one of the first authors to conduct a conflict analysis of territorial base for Catalonia and finds an increase of conflicts from this decade due to four contributing factors: the growing public concern for the quality, resources, security and identity of the area where they live, the rebirth of the territory as a fundamental component of individual and collective identity, the crisis of confidence in the institutional forms of expression and citizenship and government failures or shortcomings of sectoral and territorial policies deployed to date, many of which do not meet their goals of social cohesion, economic development, respect for the environment or sustainability expressed in their preambles.

To these factors must be added two more very important in the context. First from the 80’s Spain, like many other countries began a process of territorial integration at European and world today because of globalization, which increased the level of competition of cities and their needs in all kinds of facilities and equipment as well as major events to promote itself and attract investment and tourism. These processes inevitably generate conflicts of all kinds, against the expansion of an airport or a landfill, holding a big event, the urban regeneration of historic centers, construction of new highways and rounds or the gentrification of an old working-class neighborhoods.

The other factor that explains the proliferation of conflicts in Spain is the period of “boom” housing that starts in the mid-90 and ends in 2008. Many citizens are grouped together and protest in many towns and cities against the approval of all types of urban projects in land consumption intensity, especially in coastal areas and big cities where water is scarce. The novelty in the collective action of this nature is in that it brings in new-style partnerships as “platforms” or “associations” that do not use much the traditional political parties to convey their protests. 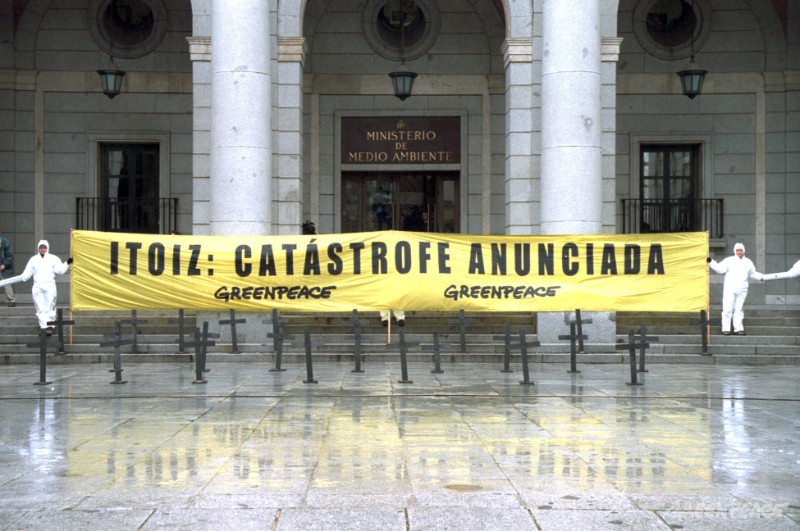 Territorial disputes over the construction of dams have been very intense in Spain, not only because of the economic cost of the works, but by the forced abandonment of hundreds of villages and thousands of people, flooding of farmland, forests of natural interest and pastures as well as numerous examples of historical heritage of all kinds.

Urban conflict in Benimaclet suburb (Valencia, Spain), because of a massive development plan  approved for the Huerta cultural landscape, the neighborhood association decided to evolve from the protest to the action. Occupied the land to be developed and adapted the site to install self-organized urban farming plots.